skip to main | skip to sidebar

It takes a lot for me to get interested in a book. I'm a pretty picky reader and I can usually tell by the first ten pages whether I'll like a book or not. When my friend loaned me the book, Consoling the Heart of Jesus by Michael E. Gaitley, MIC, I assumed it would contain nothing new in it; nothing I hadn't read before. On the contrary, this book has done something that hasn't been done in a long time. This book has changed the way I will go about my spiritual life and the way I view getting through the day. Most books I read are lives of the Saints, or other books on spiritual guidance. Although these books encourage me along my journey and give me new ideas as to how better serve Christ, rarely do they completely change my outlook on things, because my outlook is usually in line with the particular author I have picked up.

Consoling the Heart of Jesus is very basic theologically at it's core. Most of it I have read before. But there were two pages that hit me like a ton of bricks. One of those "duh" moments where you think, "Why didn't I know this before?" Lately I have been struggling with making change stick. I go through phases where I want to give up all my vices all at once but fail in a few days if not a few hours. I couldn't, for the life of me figure out why my will was so weak and why I had such a hard time mortifying myself or saying no to the smallest piece of chocolate. I didn't know why I could only make it through a few days of Lent, only to give up on my fast when I used to be able to give up the world for Christ. Do you go through phases of change? Do you try to give up a lot at once and then fall backwards only to be disappointed with yourself when you failed to give up what you had promised? If so, this post is for you (Laura? Diet Coke?). Bear with me because it's going to be long, but if you are like me, it could be life changing. Here are the two excerpts from the book that really helped me:

"Let's say we've decided to be hard-core. Let's say we're determined to detach ourselves from one of our pesky attachments. Specifically, let's say we've decided to zero in on our detachments to doughnuts. Now then, because we want to have Ignatian indifference, we force ourselves to let go of them...there, we're free. This "freedom", however, only lasts a brief time. The hand shoots for something else: ice cream! Or, as we begin to relax, the doughnuts come back with vengeance as they somehow jump up into our mouths and down into our bellies. No, this isn't the way to become indifferent.
In striving for indifference, sheer acts of the will won't work - at least not for long. But don't worry, there's hope. There's a secret Ignatius wants to teach us. It's the principle I've already mentioned, 'first things first,' the principle of keeping your eyes fixed on the goal, the first thing. It's the principle St. Peter discovered the hard way when he began to sink into the sea after taking his eyes off Jesus (see Mt. 14:24-31). It's the principle we might call 'the primacy of contemplation,' the primacy of keeping the eyes of our hearts lovingly on the Lord." (page 38)

Here is the Second Quote from the book:

"We just stepped inside a big, Gothic cathedral. The lights are all out, except for one that brightly shines on the main altar. There, in the center of the altar, sending splintering rays in a thousand directions, stands a brilliantly golden monstrance with Jesus in the Eucharist enthroned at it's center. Behold him there as he waits for his friends to come to him. Now look. See that people do come and go. Many ask for something, 'Jesus give me this, help that person, remove this cross...' and then they leave. The Lord Jesus, who is so kind and good, readily gives to them. Now look. St. Therese has just arrived. Observe her prayer as she looks deeply into the heart of Jesus, truly present there in the Blessed Sacrament. What's her attitude toward him? Interesting. Her face is full of compassion. It's as if she sees that this good Lord who gives and gives, sorrowful, and Himself in need of help and consolation. Now listen to what she says.
Did you catch that? She's not asking Jesus to give to her, rather, she's asking what she can give to him. What an amazing turn!
As St. Therese gazes on the Eucharistic heart of Jesus, she doesn't see him as if he were a machine into which one puts a coin and then automatically gets graces. Instead, she sees him as living and real. In fact, she sees that he has a human heart. She sees a man who has feelings, a man who is hurt when people are cold, ungrateful, and afraid of Him. So, Therese decides she wants to console his aching Heart, which is so neglected. Like her, why don't we who have been given so much by this good and gently Savior allow our gaze to penetrate more deeply into his Sacred and Eucharistic Heart?" (page 44-45)


You see, for the past few years, I have been focusing more on what and how much I was sacrificing instead of focusing on The One for whom I was sacrificing. I was putting second things first and falling flat on my face every time I failed. And I assure you, if you go about "changing" and sacrificing with your own willpower, you will fail. My view of Christ has been more about what He can do for me rather than what I can do for Him. Giving something up or making a change is easy when you are getting something out of it (i.e. losing weight etc.), but when you are trying to change because you think that God calls you to be a better and different person, you have to know the person you are changing for. This may seem a simple thing, but it is a very difficult in practice. To see Christ as St. Therese does in the above meditation means knowing Christ on such a deeper and more personal level. I think the only way to change it is to stop focusing so much on the "doughnut" and focus more on the Man on the cross. I want to get to know Him more personally as a Man, who walked this earth, wept real tears and felt real pain. My mother's family has always had a great devotion to The Sacred Heart of Jesus, and after reading this book I have felt moved to pick up this devotion (for my non-Catholic readers who have no idea what I am talking about I suggest looking up The Sacred Heart of Jesus and reading my post on offering it up). I feel that the only way I will move towards an attitude of, "what can I offer up for you today Lord" is through a greater understanding and love of His Sacred Heart and a greater desire to offer reparation to that Heart who loves so much and suffers so deeply.

"Behold this Heart which has so loved men that it has spared nothing, even to the point of spending itself and being consumed to prove its love to them." - Jesus to St. Margaret Mary 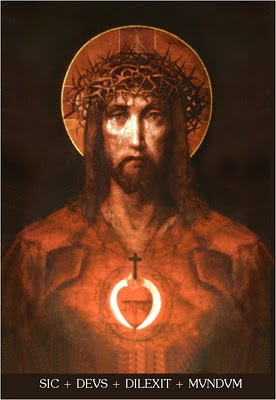 If you want to contact me via e-mail you can reach me at: theescapeblog@gmail.com

Andrea
I am a Catholic wife and mother of four, striving to grow holier by the day. I have a son and three daughters and am currently homeschooling the oldest two. I am a doula and have a special passion for all things birth related. This blog is my life and thoughts escaping from my head to the computer screen. So pull up a chair and come along for the ride!